New Goal for next few meetings: To proceed sequentially (hyp's 4,5,6,7,8,9), comparing and relating the hypotheses.

How he talks about the introduction to each of the hyp's. Must 5 follow from 4? Why is it called the 4th? And how does it relate to the preceeding?

Relationships between the hypotheses.

Why is 4 where it is? Behind that are these 3 questions. And what is common among them? (See today's diagram)

(moving around late 18min is horrible. Possible to put in his pocket again? The scraping around the table is raucous on the ear.)

What do you notice about the opening line in 4? He is now dealing with *experience* (πάσχειν)

31:25 3rd Parm, same reasoning. Why repeating what is obvious? To give the reasoning? Why is he saying it, if we already accept the first 2 statements?

πῃ (pei), same sentence - "in a certain particular/indefinite way" - this word is going to play a major role in the 4th hyp

So we are in the category now of "appearance and reality"? (Going from reality to appearance).

He has a problem: He has to explain pei (in some indefinite way).

Aristoteles catches it. So now Parm has to explain it.

Why does he need that if he is talking about "experience". He has not helped us. We are on a tangent, right! Or no?

45:30
When we talk about part/whole relationships, this is how we are going to talk about "a piece of the all", which a whole must have. (Not having to do with the Many). Each piece a one.

46:30 The Self would also be a piece of itself. Why do moderns have a war against "itself"?

Moderns: You don't need the word, "itself". Their position is it is redundant. They don't want it connected with any noun. Are they right?

Why is "Itself" essential if you are thinking like a Greek, though?

Real sooner or later disappears after a while. Is it possible to discover something that is Real in itself? Nothing can be added to it. It would be redundant. Therefore it deserves..

53:50 Pierre's story about his own education

Where do we learn our philosophy? from English teachers. "The only thing real is Hemingway.." etc Counting words, etc.: less words is more meaningful, etc.

Math class theory of limits story again ("as close as you please") at St John's.

Astronomy is never completely accurate. It always has a certain confidence range.

Calculus is not really mathematics. It does not have the elegance. (But it is required for engineering.)

But they should go into number theory after trigonometry.

All engineering is space and time.

The Moderns' War on the Self.

Carl Rogers - just agree and nod your head whenever the self comes up.

Re Freud: Must you have a complete system in order to publish something about the nature of Man, in psychology?

What if someone develops a psychotherapy, and then admits that it is interminable?

(That's David Hume: You can never understand anything, because you cannot discover a cause.)

Barbara: This is like, "As close as you please".

PG: That's why these clowns all agree!

1:11:30 PG: How can anyone accept David Hume's philosophy, if he says (as he does at the end of his book), (paraphrasing): "Don't ask a certain class of questions. And I'll tell you one of them: Don't ask what a cause is. And by the way, there is no Self. There is just images. And everything is experienced within you. Therefore don't ask if there is anything similar out there to what you experience inside. Don't ask that. It is impolite. Because you can't get an answer to it."

But they were going this way, to get free of the Church. math and Science in Europe gave Man the opportunity to use their Mind [unlike when one is a follower of a belief system like Christianity -ed.] and escape the consequences of dealing with the implications of their work on the Inquisition, or the Church's teaching.

1:14:30
Hume's book: "Inquiry into Human Understanding" PG: Never forget to read the last paragraph. (Paraphrasing..) "If it has nothing to do with number or experiment? If it does not, cast it in the flames, for it is nothing but rubbish." Therefore all questions of morality and beauty and all other such ideas are irrelevant, since they have nothing to do with number and experiment. Now you're safe from the Inquisition. All you are doing is getting pictures of reality in terms of numbers. Therefore mathematics can become the model for understanding the universe and escape making statements about Reality, and therefore you can escape the Church's criticism.

1:15:45
Barbara: Why number theory next?
PG: Isn't this what you are interested in? Necessary set of numbers, etc.? Relate to anything significant?

1:16:45
Georg Cantor: The guy who went back to number theory and broke through everything. Trans-finite numbers. He did a whole theory on the concept of infinity. And that you can have different orders of Infinity.

Ex:
Is there any end to numbers?
Is there an equally infinite set of even numbers?
Yes
Which is greater? (the first). Therefore a distinction.

PG: See how important the Self is in that section (P8) of the 4th hyp?

Self is generative (depending on hypothesis). If the Self can become Many, then that is a generative issue.

Principle: But anything that does not-exist-in-the-one, cannot exist in all..

We should work to understand this.

Any piece of the pie is a One, and it better be common to all the pieces of the pie.

When you are talking about a whole, what is necessary? It must have a common(ness) with the other parts.

Using a pie example and trying it again.

What's the difference between a whole and a whole in which the parts maintain a unity but not a common one-ness?

1:28:00
What's the difference between a pie and a watch? All of the pieces of the pie are equally one.

JulieH: My piece is like your piece. (Each is a One) And that one repeats itself in all the pieces.

Now the watch. Why is a watch not a whole? Because the pieces don't have everything in common.

PG: Right. So a watch has a unity, but not a wholeness. So there are different kinds of "wholes", now, aren't there?

But the pieces of a pie don't come together as a unity.

So why is this important when we are dealing with "the Self"? A: It is not a unity.

JulieH: They talk about us like a watch in psychology.

PG: Right. THey can't go to the next level and talk about what there is no difference in between all of us. They don't have a category for going higher.

The Self and the Logos: It can't be intelligible unless it shares in something which is at the root of intelligibility, which is the Logos. And the word, "logos" has a higher significance than something being merely intelligible.

Barbara: Part of the "game plan" of Providence?

PG: Yes. Must have a telos, beginning, middle, end.

Ex: Nazi death camps intelligible, but not with the Logos, and not providential.

And the Logos is inherent in the Brilliant Light of Being.

1:36:28
PG: Why does some dude who is likely to have a very bad reputation for telling the truth, come out of an experience of the brilliant light of being and say, "I know what that is: Mind itself!" (?) See? He is seeing its intelligibility. Because intelligibility must proceed from some image of the Mind, must it not? How come?

Mind turning on itself. A way of talking about it. What does this presuppose? Logos.

PG: Must the goal of anything, if there is the presence of the Logos, have an end? A true goal: perfection?

PG: Okay. Does intelligibility presuppose the same kind of perfection? Or not?

PG: No: One is just being effective. A concentration is nearly effective.

The Logos has perfection, not merely effectiveness

A total end. Its DESTINY. The perfection of Man needs the idea not only of effectiveness, but perfection (of himself).

So the key is The Good.

The goal of modern psychology is effectiveness, not perfection of the man. Just to return to work. Just to adjust to a sick society.

What yoga should we recommend students get into?

Everybody knows kids reach a certain crisis. And the crisis is: Is it likely they may have an interest in pursuing what is personally significant to themselves? Doesn't the whole society -- family and schools and churches -- come down on the kid: "Do something practical! Find a way to survive! That's more important than anything else. Make that your vocation, and what you really want, make it a-vocation." (Adaptation)

(Back to the 4th hyp). So we are dealing with the Self, here. And rooting it in experience.

Church followers. Everyone the same. No one allowed to stand up. This is what makes you whole. They want you to be like a pie.

PG: It's all captured in one sentence. It's a principle. (One of many principles here. Often the Balboas put them in italics.)

In the Greek: Genetive plural. "no one"

It has no particular one-ness. Because they only have what belongs to all. Stressing the common-ness.

PG: Literal yes, and that helps: Because then that oneness is not particular to any one. All of the pieces of the pie are the same.

Now the last phrase (Pierre rewords): "Neither as a piece of any one, or any of the other parts as well."

Now apply that to the Self, and you see where he is going. And he is talking about experience. You cannot find any one self that is more fully The Self than another.

The question in Plato's Republic is central: When does philosophy begin (in terms of The Republic)? When you can you start doing philosophy?

Classical Hinduism: The person reaching that age goes out and becomes a sainassa (sp?). (But unfortunately, in practice those men only do it for 3-4 days, then the family still grabs them and brings them back, puts them in a hut in back.) 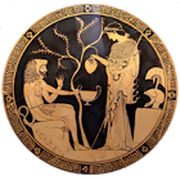